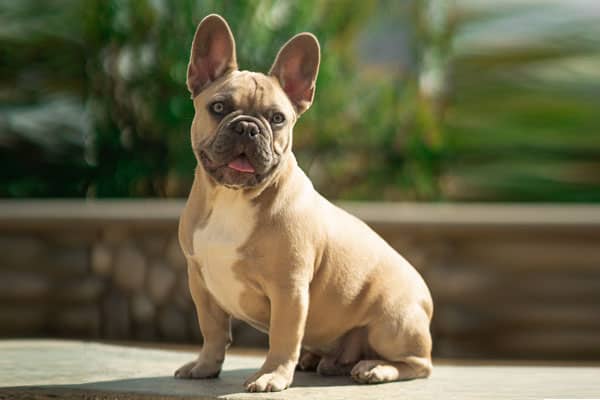 x
French Bulldog Pregnancy Stages: What to Expect Along the Way video

French Bulldogs didn’t get so popular as a companion canine because they like to be left alone. These dogs are all about being with “their” people. In fact, this is one of the hallmarks of this dog breed.

While French Bulldogs aren’t known for barking a lot, they will vocalize when they feel that they need to. Crying is one particular sound that Frenchies tend to make a lot.

But because most dog owners – and especially first-time French Bulldog owners – expect a dog to bark or even howl, they often are understandably confused about the meaning of canine crying.

What exactly does this even sound like? Why do Frenchies bark very little but cry a lot? Is there anything you can do to make the crying stop? We are going to go into detail with all these questions and more in this article.

Listen to the Sound of a French Bulldog Crying

In case you are not quite sure if the sound we are describing as “crying” is the same sound you are hearing your French Bulldog make, you can listen to this short video to match up the sounds.

In the video, the owner states that the Frenchie is crying out of boredom.

But you will notice there are actually a number of different sounds – some are more like a traditional canine whine while others almost make the pup sound like a bird!

How do these adorable pint-sized dogs manage to make such a wide range of unusual sounds? More importantly, why would a French Bulldog evolve to chirp like a bird and cry like a human baby?

We’re about to find out now.

In this French Bulldog owner forum, you can see post after post from Frenchie owners talking about French bulldog crying.

If you have been feeling frustrated by this behavior in your own dog, you can easily see from the posts on this forum that this is normal – you are not alone.

On the one hand, it can be good to know this is a legitimate and basically “normal” behavior that many Frenchies exhibits. On the other hand, it can be wearing on your nerves to be followed around by a crying dog all day and all night.

As one French Bulldog breeder explains, uring the first week or two after your Frenchie comes to you as a puppy, you can expect a good amount of crying and whining.

Your dog is adjusting to all kinds of changes at a breakneck pace.

From learning to sleep without littermates and mom to teething to learning the ropes of basic obedience commands, your puppy is going to feel overwhelmed and perhaps anxious. Crying is a natural part of this process.

Another French Bulldog breeder warns prospective owners that Frenchies are a “needy” breed.

They are also a noisy breed.

With this rather wide and varied menu of sounds in a French Bulldog’s regular communication repertoire, the fact that your Frenchie isn’t barking a lot may simply go unnoticed.

Why Do French Bulldogs Cry So Much?

So now you understand that, on some level, French Bulldogs have a tendency to cry. This is a known trait of this breed.

But clearly, since the French Bulldog is still the fourth most popular American Kennel Club (AKC) registered purebred companion canine in America (out of nearly 200 registered dog breeds), owners somehow find a way to deal with this sometimes troublesome behavior.

Understanding why Frenchies often cry so much is a big step towards achieving this goal. After all, the sooner you figure out the mystery, the faster you can work towards stopping it.

Here are the main reasons breeders, owners, and canine veterinarians cite that can cause a French Bulldog to start crying:

1. Your French Bulldog is lonely

French bulldogs are a created breed, bred down from larger working (fighting) bulldogs to their current toy breed size.

Your French Bulldog has a long history of accompanying people around town both day and night, lounging in coffeeshops and bellying up to the bar in dancehalls and saloons.

So a French Bulldog home alone is going to be a lonely Frenchie indeed. If your idea of a great companion isn’t a dog that wants to be with you (and ideally on you) at all times, you may have an adjustment period to living life with a Frenchie.

2. Your French Bulldog is anxious

Just like many dog breeds might bark out of anxiety or nervousness or fear, your French Bulldog is equally likely to cry or whine when they feel unsettled.

You can test this theory by noticing what your French Bulldog does when a thunderstorm rolls in or the summer fireworks start popping.

But it doesn’t take a big event to create anxiety in your sensitive Frenchie, either. Just sensing that you may be going out without your dog may trigger anxious crying.

3. Your French Bulldog is cold

Frenchies are small dogs. Most weigh less than 20 pounds fully grown. They also have very short, fine coats. This makes for a neat and refined appearance.

But it can also cause your dog to get cold in winter and when the air conditioning is blasting in summer.

For some dog breeds, the French Bulldog included, the purchase of canine clothing is not just for the sake of cuteness. It can also be a good way to help your pup stay warm year-round.

This can be especially important for Frenchies, which are known to be an indoor breed that can live perfectly happy inside even in small, confined spaces.

Just like many babies cry when they aren’t feeling well, your Frenchie is quite likely to express feelings of dis-ease or un-well by crying.

5. Your French Bulldog wants your attention

Sometimes French Bulldog owners inadvertently reinforce the very behavior they are trying to stop by running to see what’s wrong when their Frenchie starts crying.

You can bet your dog will learn quickly that crying equals your attention!

6. Your French Bulldog is bored

French Bulldogs are not the most energetic of dog breeds. Much of the reason for this is due to their short (brachycephalic) muzzle type, which makes breathing somewhat difficult.

But French Bulldogs also aren’t great at entertaining themselves. Their idea of entertainment is being with you, doing whatever you are doing. If you aren’t around or aren’t available, your Frenchie may start crying to let you know they are bored.

7. Your French Bulldog is confused

Frenchies are sensitive dogs and are incredibly attuned to their owners. They can pick up on the subtlest of human expressions and emotions and can also sense conflict.

Like all dogs, French Bulldogs thrive on regularity and routine. Changes to your dog’s daily schedule can provoke confusion about what is supposed to happen when.

If your Frenchie is confused, you can expect some “acting out” via crying instead of the more typical barking. Here, if you can learn to hear crying like you would hear the barking, it may be easier to identify the issue and fix it.

How to Stop Your French Bulldog From Crying

As a matter of fact, there is.

1. Take your Frenchie to get a veterinary checkup

As Little House Animal Hospital explains, the very first step to take is to just double-check that your dog is healthy.

Take your Frenchie for a veterinary checkup so your vet can verify all is well health-wise.

2. Give your dog more activity and structure

Once health conditions are ruled out, you can take a closer look at behavioral issues that may cause crying.

Since the French Bulldog is known for being a breed that cries rather than barks, you can expect some amount of this behavior no matter what you do.

But you can reduce crying by making sure your dog has adequate socialization, playtime, exercise, and plenty of you-time.

You can also eliminate any of your own behaviors that may be reinforcing the crying behavior so your dog learns crying means no attention from you.

Do you have a crying French Bulldog at home? Share your tips on how to keep Frenchies content and quiet.