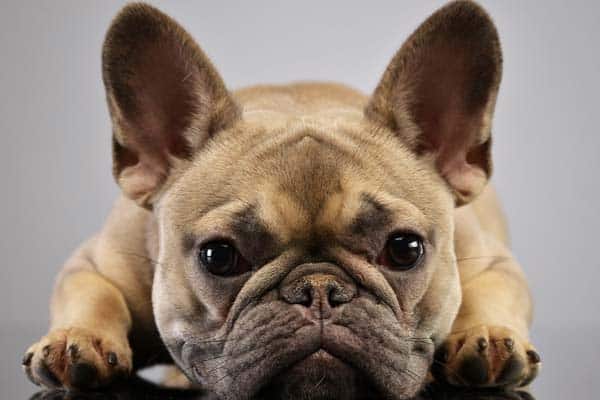 While French Bulldogs are typically known for being cute and devoted companions, they have a habit that might start to drive their owners crazy.

French Bulldogs, like all breeds of the bulldog, tend to lick their paws a lot more than other breeds.

A little bit of paw licking here and there is not a big deal in dogs, and an occasional lick is not anything to be worried about.

However, what about when it seems like a dog is fixated on licking its paws and won’t stop, no matter what the owner tries to do to deter it?

There are a few different reasons a French Bulldog might spend a lot of time licking its paws, including dirtiness, illness, injury, or psychological reasons.

While it is not usually a major issue, owners will want to get to the bottom of why the licking is occurring and try to stop it.

While any type of dog could presumably injure its paws and give them a lot of attention, bulldog breeds – including the French Bulldog – tend to spend more time on their paws than other breeds.

Some of the reasons for French Bulldog paw licking are certainly breeding specific.

French Bulldogs are a breed that is prone to paw irritation

While French Bulldogs are loyal and affectionate pets, one challenge their owners will have to face is that they are prone to skin issues.

According to the dog walking experts at Wag!, bulldog breeds are much more susceptible to having some sort of skin problems than other breeds.

That being said, there are a wide variety of reasons why a French Bulldog might start continually licking its paws, and some of these causes are more common than others.

Here are some of the most common reasons that a Frenchie will spend too much time licking at its paws.

Why is my French Bulldog always licking its paws?

According to the French Bulldog breeders at French Bulldog Australia, there are a wide variety of reasons for excessive paw licking, so owners will probably have to figure out what the issue is through the process of elimination.

One common cause is simply that there is a foreign object lodged in the paw. This might be a thorn or burr from a plant that a bulldog stepped on or some gravel from the road. Depending on the object, the Frenchie may have also gotten a small cut in the paw pad.

The simplest solution for this issue is simply to remove whatever is bothering the dog from the paw. If there is a thorn or other sharp object, owners should also try to wash the wound to reduce the risk of infection. If it is a larger cut that is bleeding, it may be necessary to see a veterinarian.

Sometimes a French Bulldog may have also gotten bitten or stung by an insect or spider while out on a walk. There will probably be a mark or indentation from the bite in the paw.

If the dog was stung by a bee, there might even still be a stinger lodged in the dog’s foot.

Since treatment for this issue will vary somewhat depending on what actually bit or stung the dog, it is usually best to see a veterinarian in this case.

Some dogs have a reaction to bug bites that means they would need to get an anti-histamine treatment to reduce their pain and swelling.

One of the causes that baffle owners the most is when French Bulldogs don’t seem to have anything wrong with them, but rather, they just simply enjoy licking their paws. While this may seem strange, licking for sheer enjoyment is a common cause for this issue.

A veterinarian will be able to give advice on how to deal with paw licking if the dog just seems to enjoy doing it without any other injury.

Some vets may apply a spray with an unpleasant taste, or put a bandage on the dog’s feet to deter it from licking any more.

As mentioned above, French Bulldogs are prone to skin irritation and dryness on their paws. Dirty paws will, of course, lead to a dog trying to lick and clean them itself, so it is important to wipe the dog’s paws frequently. Dry paws might be solved with ointments or salt baths to help relieve the discomfort.

The Ask Frankie French Bulldog blog mentions some of the more serious issues that might lead to a Frenchie licking its paws all the time.

For instance, the dog may have developed a hormonal imbalance such as Cushing’s Disease and gotten dry skin as a result.

If the issue is a hormonal imbalance, owners will want to see a veterinarian. These sorts of issues are usually treated with medication, and with time, the symptoms such as dry skin should gradually start to resolve.

Unfortunately, paw licking might even be a sign of cancer, as in cases where the cancer is developing in the skin around the feet.

This is definitely a case where a veterinarian should be consulted to see how to ease the pet’s suffering during treatment.

Clearly, there is a wide variety of reasons that a French Bulldog might start licking its feet too much.

Many of these can be diagnosed at home, though it may take owners a long time to work through all of the potential causes and figure out what exactly is causing the problem.

Owners can help the problem with home remedies

While more serious illnesses of the foot will require veterinarian care, daily issues such as dirtiness or dry skin can be dealt with at home. There are a few helpful strategies for French Bulldog owners to give their pets some relief for their feet.

As explained by the Frenchie World blog, the main thing an owner will want to be doing is regularly cleaning the dog’s feet with gentle soap and water. While basic, this sort of regular cleaning can be very good for the dog’s feet.

There are also ointments that an owner could buy and apply regularly to the pads of the dog’s feet. This will help to keep the feet well moisturized, and make sure that the paw pads don’t become cracked or damaged on account of dryness.

Similarly, there are a number of bath salts that an owner could purchase to give their Frenchie a regular foot soaking.

While this can be quite effective for many French Bulldogs, it will also somewhat depend on how a dog does with bathing in the first place.

While French Bulldogs are generally obedient and tolerant dogs, there are some dogs that just don’t enjoy being bathed no matter what.

The salt baths for French Bulldog paws will want to be reserved for dogs that are generally tolerant of being cleaned and bathed.

It is a pretty simple process: add bath salts to warm water and let them dissolve. Put your French Bulldog into the bath and let the paws soak for a few minutes. Then, rinse and dry off the pads and drain the water.

For an example of this sort of bath for a French Bulldog, you can see this video of Teddy the French Bulldog getting an Epsom salt bath soak. As the owner mentions, Teddy actually seems to enjoy his baths!

Even more so than for other breeds, it is of utmost importance to make sure that a French Bulldog has healthy paws.

Because the breed is more susceptible to paw and skin issues than some other breeds, it is that much more important for owners to be vigilant.

Luckily, there are a number of at-home remedies that can help prevent common foot issues. While it may be obnoxious when a French Bulldog licks its paws too much, it is always important to see if there is a deeper issue.