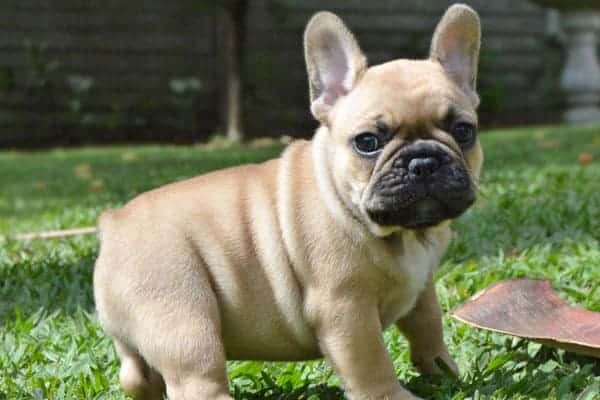 The French Bulldog, or “Frenchie” as fans often call them, is short, sporty, and unmistakably sweet.

It is no surprise for new owners to learn these dogs are the fourth most popular American Kennel Club (AKC) registered purebred dog breed in the United States!

But out of all the adorably cute things French Bulldogs are known for around the world, poop eating isn’t one of them. In fact, this is one of the behaviors that most stress out Frenchie owners.

Why do French Bulldogs eat poop? Is this a normal behavior or is something medically wrong? Is there anything you can do to keep your Frenchie from eating poop – their own or the poop of other animals? Let’s discover the answers to these questions now.

If you ask your dog’s veterinarian about this behavior, they will tell you it is common enough to have earned its own medical term – coprophagia (“caw-pruh-fay-gee-uh”).

Coprophagia describes “feeding on dung.” The same term is used regardless of who is eating whose poop. So if your French bulldog eats their own poop and if your Frenchie eats your pet cat’s poop or the dog next door’s poop, it is still the same behavior.

But why on earth would your beloved French Bulldog do this when you lavish them with the best food and tastiest treats? It is just so gross!

Just in case you need more proof that you are not alone in dealing with this issue (although by now we highly doubt you do) you can always check out this super-gross YouTube video made by a French Bulldog owner. But remember – we warned you!

Why Do French Bulldogs Eat Poop?

So why in the world does your French Bulldog eat poop – their own or the poop of other animals? Let’s ask a veterinarian for more information.

According to noted veterinarian Dr. Becker, there isn’t actually just one reason why your French Bulldog may start eating poop. There can be a number of different reasons.

In the world of canine biology, there are only two reasons when poop eating in companion animals may be considered “normal.” And here, we mean normal in the sense of it being wired into a dog’s DNA for reasons of survival and/or protection.

1. A mother French bulldog eats the feces of her young as part of cleaning them

If you have never bred your Frenchie, you may not realize that the mama dog has to help her newborn puppies learn to poop. She even has to remind them to poop! She does this by licking their private areas with her tongue.

This teaches the young puppies to poop after they have nursed. Sometimes the mama dog will end up eating the poop as well, either to protect the puppies by eliminating odor that predators might pick up or simply because it comes out while she licks them.

2. A French Bulldog is trying to glean extra nutrition missing from their diet

The only other biological reason why a Frenchie may start eating poop (here again, their own or that of other animals) is due to a nutritional deficiency.

For example, let’s say the food you are feeding your French bulldog isn’t delivering the right amount of certain key nutrients.

Your dog may start eating poop to try to supplement their diet and add back important digestive enzymes, digestive fiber (prebiotics), gut bacteria (probiotics), vitamins, minerals, and other trace elements.

This is quite common in many species of wild animals, and particularly those that are considered foraging species who may struggle to simply find enough food to survive.

For some species (like guinea pigs for example), poop eating is so vital they will die if they are not able to have access to their own feces. But it is not either necessary or common in companion canines unless the captive diet is deficient.

Other Less Normal Reasons Why Your French Bulldog May Eat Poop

In addition to these “normal” biological reasons why your French Bulldog might suddenly start to eat poop, there are other less-normal reasons that can trigger coprophagia.

As your French Bulldog’s doting owner, you may not be able to think of a single reason why you would ever eat poop – like, EVER – your dog can find lots of good reasons for coprophagia.

Dogs Naturally Magazine outlines the most common reasons dogs eat poop that fall outside the two biological reasons we talked about here earlier.

These reasons for poop eating range from the medical to the behavioral and are each common enough to have plenty of evidence behind them.

1. Your Frenchie has a parasite or medical condition

Frenchies are petite pups and active enough to use up the nutrients they get at mealtimes. But when you add a worm or a parasite that is now living off your dog’s food, your pup may need to eat more to sustain them both.

When there is something wrong in your Frenchie’s digestive process, it may interfere with your dog’s ability to digest their food and/or absorb the nutrients from their food.

When this happens, your dog may still be hungry even if you are giving them ample portions at mealtimes. Eating poop maybe your dog’s way to tell you there is something wrong.

3. Your French Bulldog is bored

Frenchies that get bored may start biting or eating inappropriate things, including the couch cushions, their toys, your clothes, and poop.

4. Your dog isn’t getting enough food at mealtimes

If your French Bulldog is hungry, you can bet they will pop poop in their mouth as a way to fill up.

5. Your Frenchie is still a puppy and will mouth anything (and we mean anything)

French bulldog puppies that are going through teething are likely to mouth, bite and swallow just about anything, including poop.

6. Your French Bulldog thinks poop smells amazing and must taste even better!

It’s hard to argue with such a super-sensitive sniffer!

7. Your Frenchie has gotten stressed out for some reason

French Bulldogs are very smart, and often smart dogs are more emotionally sensitive to change and disruption to their normal routine. A move, the addition of a new pet or person, even a change of food may trigger poop eating.

8. Your French bulldog is from a puppy mill and this is a learned behavior

Dogs that have been rescued from puppy mills are more likely to exhibit coprophagia because they were not given enough food (heartbreakingly sad but oh-so-true).

9. Your Frenchie has learned this behavior from their mom or another dog

South Boston Animal Hospital explains some dogs learn this by watching their mom.

10. Your Frenchie has learned that eating poop gets your attention

Let’s be honest. French Bulldogs are incredibly smart! If your Frenchie has noticed that eating poop always grabs your attention, you can absolutely expect this behavior to be added to their list of tricks to keep your eyes on them…and only them.

How to Stop Your French Bulldog from Eating Poop

From the moment you first noticed your French Bulldog chowing down on poop, you probably wanted just one thing: to make it stop.

This is totally normal! But first, you have to find out exactly why it is happening. You may need to enlist the help of your dog’s veterinarian to discover which of the reasons you just read about may be contributing to your dog’s poop habit.

Once you know the reason, it becomes a lot easier to take steps to make eating poop seem a lot less appealing.

Here are some tips to try right away (even while you may be waiting for veterinary test results to come back):

Has your French Bulldog suddenly taken to dining on poop in your backyard or while you are out and about? Do you have any great tips to share about what you did to solve the problem?

We are all about finding new creative ways to keep dogs and poop apart. Drop us a comment to share your tips.