If you're talking about crossbreds, you're probably familiar with the term hybrid vigor. When two different canine breeds mate, the offspring produced have more genetic diversity. The offspring possesses the characters of both parents, which gives rise to a unique canine companion. In that context, one of the most famous hybrid dog breeds is Golden Retriever Bulldog Mix. Let us dig deep about this breed. 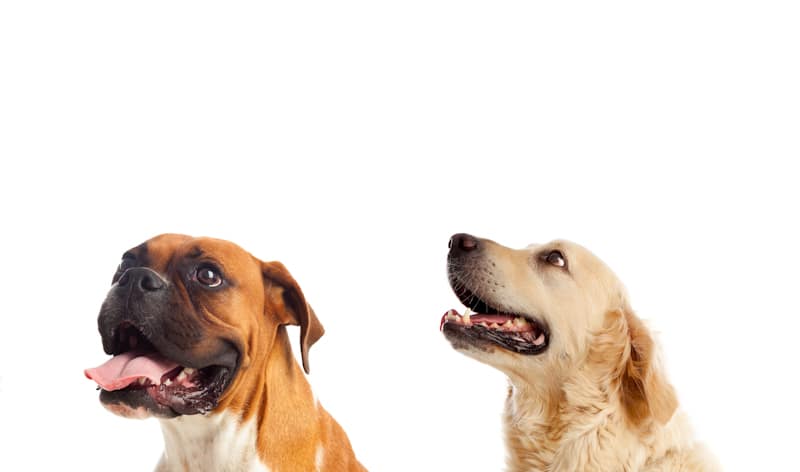 Golden retrievers, formerly known as hunting dogs, are medium-sized dogs with a sturdy, muscular build and a medium height that originated in Scotland. Their beautifully golden coats, small and proportional heads, very intelligent yet sympathetic eyes, small ears, and straight nose are all characteristics that distinguish this breed from others.

Goldens have a graceful, self-assured gait, and their beautiful tails are nothing short of the epitome of elegance. In terms of height and weight, male Goldens range in height from 23 to 24 inches and weigh between 65 and 78 pounds.

Historically, bulldogs have been associated with fighting activities since the seventeenth century in England. Their infamous "sour mug" expression has become an international emblem of strength and perseverance for people worldwide. These devoted and loyal friends are equally at home in both the city and the country. Their unique rolling pace, loose skin on their forehead, flat snout, short ears, and furrowed brows distinguish bulldogs from other breeds of dogs.

English Bulldogs are typically between 45 and 55 pounds in weight and can grow to be as long as 23 inches. They are also a generally robust breed, with a life expectancy ranging from 12 to 16 years on average. Their coats are available in various colors, including fawn, blue, brindle, and a variety of other color combinations. Their nostrils are generally black, and their eye hues are primarily brown, as is their skin tone. They have short coats that shed slightly throughout the year and do not require considerable maintenance on a regular basis.

Characteristics of the Golden Bulldog

The physical qualities of the Golden Retriever Bulldog Mix might be inherited from one of the parent breeds, or they can be a blend of both. In other words, your Golden Bull may have the appearance of a Golden Retriever, an English Bulldog, or a combination of the two breeds.

When it comes to the Golden Bulldog's other physical characteristics, it might have wrinkled skin on its face and on its entire body. In order to protect the skin of your Golden Bull from becoming too 'wrinkly,' you will need to keep it clean and dry at all times. When it comes to the coat of this mixed breed, its coat can be anywhere between a short and a medium-length coat, depending on the individual.

With markings from the English Bulldog dad, the coat is a golden tanned tone with golden highlights. So, you should clean and brush your Golden Bulldog at least a couple of times each week. This will help to keep the amount of shedding under control.

Golden Bulls are medium-sized canines with a stout build. Their nutritional requirements are determined by which parent they prefer. Golden Retrievers have far greater appetites than other breeds, owing to their larger size and significantly higher activity levels.

In contrast, English Bulldogs are not only large and hefty, but they are also noted for being quite sluggish. They require more encouragement to get out and exercise, and as a result, their appetites have been reduced.

It is preferable to consult your veterinary doctor for information on the particular daily quantities that you should give your Golden Bulldog.

Golden Bull requires daily exercise in order to maintain a healthy weight, regardless of their age. Dogs, especially bulldogs, are notorious for fast gaining unhealthful weight if they are allowed to continue eating without being exercised.

Pay close attention to your Golden Bulldog and his or her general requirements. You should keep adjusting until you feel like you have found the sweet spot. These dogs are very versatile, so don't be concerned about matching their requirements to yours; in fact, they can assist you in matching your requirements to theirs.

Temperament & Personality of the Golden Bull

Aside from being patient and sociable, the Golden Bull is a smart, clever, and extroverted dog. In terms of personality, it would not be incorrect to claim that the Golden Bulldog has combined the best of both worlds, i.e., the finest of both the Golden Retriever and the English Bulldog.

Similar to how the Golden Bull's physical appearance might vary, its personality can be influenced by either of its parents or a mix of the two. One thing you can count on from your Golden Bulldog is that he will be loyal to you. This is because both of its parents, the Golden Retriever and the English Bulldog, have a long history of demonstrating strong loyalty to their owners and pack.

Besides being a devoted canine companion, the Golden Bulldog is also an incredibly loving and affectionate dog. Once again, this characteristic is inherited from its parents. As an exceedingly calm dog who is unlikely to damage anybody, the Golden Bull is an excellent mate for families with children and other pets.

Besides being kind and compassionate, the Golden Bull also has excellent obedience and is ready to learn new tricks. This implies that teaching your Golden Bull basic and advanced dog skills will not be a challenging task for you. Additionally, because of this, the Golden Bulldog makes an excellent therapy dog. Aside from its easy-going and friendly demeanor, the Golden Bull is constantly eager to learn and be challenged.

Although the Golden Bulldog is a muscular and healthy designer breed, if he inherits the majority of his physical characteristics from his Bulldog ancestors, he may develop some inheritance health problems, such as a respiratory problem due to his plain muzzle, hip & elbow dysplasia, skin & eye infection, heart problems, and so on.

Proper care and frequent consultation with a competent veterinarian may help to reduce issues and guarantee that your Golden Bulldog's health is in better shape.

The life expectancy of a Golden Bull can range from 7 to 9 years, and in some cases, it can even be as long as 12 years.

The Golden Bulldog is a well-known mixed-breed dog. When it comes to concerns of appearance and temperament, there is a huge variation in this dog reed due to 2 different parents. It is also essential to provide your Golden Bull with early socialization, dog training, and intellectual stimulation in order for him or her to become the best fit for you.

In the end, it's possible that your Golden Bulldog will appear like a Golden Retriever or an English Bulldog, or a perfect blend of both.