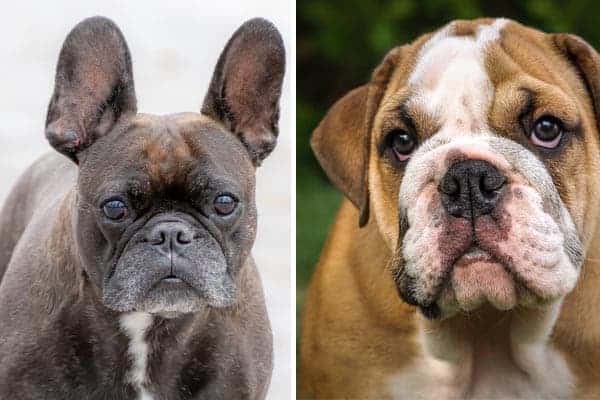 Are you in the market for a bulldog and pondering which type to get? If you are considering an English or a French Bulldog, the decision may seem challenging. Are there any significant differences, and if so, what are they?

A French Bulldog vs English Bulldog is smaller with a rounder more dome-shaped head. Other differences in appearance exist such as the ears, muzzle, and color possibilities.

There are slight to moderate contrasts in temperament and activity, with the English Bulldog being more stoic and a little less active.

Similarities are abundant, including a friendly, loving, and charming demeanor along with stubbornness and tenacity characteristic of the Bulldog.

French and English Bulldogs are remarkably similar. We cover similarities as well as contrasts that can make one a better fit for your household than the other.

Modern Bulldogs Have a Common Ancestry

These Asiatic mastiff types, present since at least 2500 BC, were extremely large and prominent in the wartime civilizations of Greece and Rome.

The old Bulldogs of England, born of a cross between Mastiffs and likely several breeds such as Alano Mastiffs, Bandogs, terriers, and Pugs, were formidable with a fierce disposition and an athletic build.

Originally responsible for holding cattle, guarding property, and dogfighting, selection began for shorter-legged and larger-jowled dogs that could effectively control bulls by grabbing their tender noses.

These shorter smaller dogs could avoid hooves better and be more cost-effective than Mastiffs. Soon, these bulldogs became bullbaiting specialists, often working in pairs before a blood sporting crowd.

It is thanks to the 1830s crackdown on an old animal cruelty law that the various bulldogs and bull terriers came to be.

When bull-baiting was banned for good, the Olde English Bulldog became obsolete. However, fanciers saw an opportunity to capitalize on branding a look.

Breeders exaggerated certain features that made attractive caricatures such as large undershot jaws and short bowed legs. Creators of the companion Bulldog also selected docility over ferocity. The dogs retained their loyalty and determinedness even as they lost their athleticism.

A breed standard began to formulate with the foundation of the Bulldog Club of England in 1878.

In 1886, the AKC accepted the breed as the Bulldog in the nonsporting group. The British Bulldog Club came shortly after in 1892 to link the breed to the UKC.

French Bulldogs, or Frenchies, originated from a miniature version of the English Bulldog. These so-called Toy Bulldogs rose in popularity in the mid-1850s as companion dogs.

They started as crosses between the Olde English Bulldog and Pugs among a society that favored smaller pets.

The Toy Bulldog was especially popular among the lace workers of Nottingham who were displaced to Normandy, France during the Industrial Revolution.

Not only did they bring their dogs with them, but there was active importation of miniature Bulldogs from England.

Fanciers developed the Toy Bulldog further by breeding it with local Rat Terriers. As popularity increased among a broader section of French workers, these dogs became the French Bulldog.

Bat ears became a trademark criterion from the US and standard around 1898. French Bulldogs joined the AKC that same year.

If you see a French Bulldog next to an English Bulldog, you will notice their differences immediately. The main standout is size, but there are other contrasts as well.

Similarities are large, square heads with round wide-spaced eyes, body and facial wrinkles, a short muzzle, a compact muscular frame, and short tails.

A French Bulldog is a small-medium breed. Males and females stand 11 to 13 inches tall at the shoulders and weigh 16 to 28 pounds.

Males tend to be heavier and more muscular than females. They adhere more closely to the breed standard.

English Bulldogs are medium dogs that are 12 to 16 inches tall and weigh 40 to 50 pounds. Again, males are heavier than females.

The Bulldog has a massive head that looks large from every angle. From the front, his eyes will be wider apart and appear smaller than the Frenchie’s.

His upper lips or flews hang down prominently on either side of the face as the classic chops of the Bulldog.

His jaw is undershot with the lower canines visible when his mouth is closed. The wide smiling look of the Bulldog is from the rounded cheeks that protrude well beyond the eye socket and lips that turn up at the corners.

The part of the head in front of the ears should be as large as the dog is tall. In profile, the nose sits well behind the muzzle, tucked in a groove between the eyes. There is a fold that encompasses part of the leather of the nose. The tops of the skull and forehead are flat.

A Bulldog’s ears are rose, semi-prick, and set wide to the sides.

A Frenchie’s head is smaller in relation to his body than the English Bulldog’s, and the lower canines are not visible when his mouth is shut. His cheeks are high and rounded and his chops are prominent but not to the extent of the English Bulldog.

You will notice the same upturned lips and pushed-in nose with a characteristic skin roll in both breeds, but in smaller proportions in the Frenchie.

The top of the skull is flat, but the forehead is slightly round in the French Bulldog, a marked difference. A Frenchie has fewer furrows in the brow and less wrinkling in the face than the English Bulldog.

Finally, French Bulldogs have their mandatory bat-shaped ears that are broad at the base and round at the tips. They stand upright facing forward.

The French Bulldog has a muscular, arched neck. English Bulldogs have a much thicker deeper neck that still arches well into the back. Each should have a dewlap at the throat.

Both breeds have well-rounded bodies and wheel backs, whereby their spines rise from the lowest point just behind the shoulders to the hips and then dip again suddenly to the tail. Therefore, these Bulldogs are tallest at their hips rather than their shoulders, unlike most breeds.

Both dogs should have a belly tuck-up from the ribs to loins. While the French and English Bulldog each has a wide-based stance, the English has her elbows set further from her body.

Also, her hindlegs will have more of a bowed appearance than on the Frenchie’s although her bones are not curved.

English Bulldogs have looser skin and more wrinkles on their bodies than do Frenchies.

A French Bulldog’s acceptable colors are cream, white, fawn, or brindle, but they can be black, black-and-white blue lilac chocolate, or black-and-tan. Bulldogs are various colors such as piebald, brindle, fawn, and tricolor.

Temperament of French versus English Bulldog

The temperament of these smaller Bulldogs is quite similar. Neither is above clownish antics and silly overtures to gain attention and affection. Both are loving and affectionate with their owners and friendly with strangers.

English Bulldogs are more protective and thus more likely to sound the alarm when visitors arrive or intruders come near. However, neither dog makes an effective guard animal.

The two breeds are gracious and patient with children. Neither is generally too active for small kids, but each is playful enough to be entertaining.

The Frenchie’s smaller size makes her less intimidating for young children and not as likely to knock toddlers over. English Bulldogs can become protective of younger kids.

Frenchies are lively, alert, even-tempered, adaptable, and comfortable in their own skins. Aggressive French Bulldogs are anomalies and indicate something went wrong in the training, socialization, and perhaps breeding of the individual. French Bulldogs are highly social, neither aggressive nor shy.

English Bulldogs look more intimidating than Frenchies with their persistent grumpy demeanor, yet they are anything but aggressive. Bulldogs are calm, unflappable, kind, and peaceful.

They should appear dignified which belies their silly natures. However, they have resolute and fearless personalities without any hint of aggression.

Bulldogs, French, and English are far removed from their fighting heritage. Both breeds tend to get along well with other dogs and also tolerant cats.

French Bulldogs might be more approachable to cats than their larger English counterparts. French Bulldogs also tend to be more clingy and prone to separation anxiety when apart from their owners than English Bulldogs.

Training is similar for both breeds as they are stubborn and independent. As companion dogs rather than working breeds, the French and English Bulldogs are intelligent but slow to pick up commands. They have more emotional intelligence than obedience.

Shedding and Grooming is Almost the Same

Both the French and English Bulldog has a double coat comprised of soft underfur and coarser guard hairs.

Each breed will strike you with a smooth, short coat, although the Frenchie’s hair is finer and softer to the touch. Some French Bulldogs do not have an undercoat at all.

In both breeds, the undercoat is not dense or extensive. The English Bulldog sheds a little more than the French variety. Both dogs are moderate year-round shedders.

The French and English Bulldog each require minimal grooming with a pin or slicker brush once a week.

A bath once every six to eight weeks is appropriate. Dogs that have allergies or skin conditions may require more frequent baths, often with medicated shampoo. You should trim your dog’s claws every four to eight weeks.

What is the Lifespan of French versus English Bulldog?

Frenchies live 10 to 12 years on average, whereas the lifespan of an English Bulldog is eight to ten years. Some of the differences in longevity you can attribute to their size. However, English Bulldogs have more severe health issues than Frenchies.

English Bulldogs need 30 to 45 minutes of exercise per day. You should split activities into multiple sessions and mix strenuous cardiac exercises with mild walking.

Puppies need training and socialization instead of vigorous exercise. Be aware of your dog’s exercise tolerance levels and the weather.

Bulldogs cannot tolerate hot and humid conditions, and it is never recommended that they exercise outside when temperatures climb above 80 degrees Fahrenheit. You also should use caution with dogs suffering from heart problems or obesity.