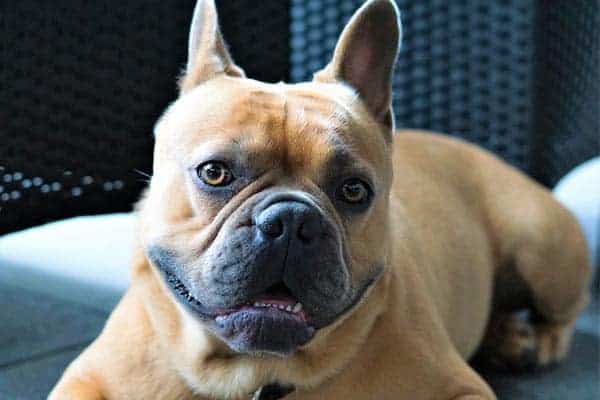 French Bulldogs, with their wide, round, expressive eyes, are one of the most sought-after dog breeds in the world today.

But although your Frenchie is clearly keen to take in the world in every possible way, vision is actually not one of your dog’s keenest senses.

What is so interesting about this is that the French Bulldog is not color blind – and is also sort of color blind. And Frenchies also have a relatively newfound vision ability that humans do not have.

Read on to learn how French Bulldog vision works and what your dog can and cannot see clearly.

True color blindness is very rare, no matter what species you are talking about. French Bulldogs, like all dogs, are not colorblind.

However, dogs do not see the color to the same degree that humans and many other species are able to perceive color.

As Live Science points out, French Bulldogs and other dogs lack the vision accessories (called “vision cones”) to see in the red and green color spectrum.

Learn About Canine Vision in This Short Video

This short YouTube video explains the major differences between canine vision and your own vision.

In the video, you will learn about vision cones, what they do, and how many your French Bulldog has in each eye.

Dogs, like many canines, evolved to rely most heavily on hearing and scent to survive, find prey, avoid predation, and locate potential mates.

As St. Francis Wolf Sanctuary rescue charity explains, vision, while important of course, has not traditionally been a wild canine’s most reliable sense.

However, this doesn’t mean that dogs have poor vision. It is more accurate to say that canine vision operates differently than our own.

How Your French Bulldog’s Eyesight Has Evolved

It is easy to look at the slightly blurry, fuzzy, greyed-out picture on the right and think that dogs see very poorly indeed.

But as we mentioned earlier here, the most accurate statement is that you see the image you need to see and your dog sees the image they need to see for the greatest survival advantage.

Humans (homo sapiens) evolved to do most of their food gathering, hunting, and farming during the day.

Canines, on the other hand, evolved to hunt prey and become more active after dark.

So while your eyesight has evolved to be keener during the bright daylight hours, your French Bulldog’s eyes are acclimated to see more keenly when available natural light gets low.

Species like people that need to see well during the day will have more cones and more types of cones in their eyes.

Species like canines that need to see better during the night will have more rods in their eyes.

However, your dog’s eyes have far more rods than your own eyes do.

As Animal Necessity explains, your eyes have about 120 million rods. Your French Bulldog’s eyes may have as many as 600 million rods.

Another intriguing difference between your French Bulldog’s vision and your vision is that dogs have a much keener “motion detector” in their eyes.

as Pets Doc Veterinary Clinic points out, here again, your dog has all those rods to thank for this.

Rods are not only better for seeing at night, but they are also better at seeing motion. So your dog is always going to see motion better than you no matter what time of day (or night) it happens to be.

There is a neat website called Dog Vision that allows you to actually see an image just like it would appear to your French Bulldog.

This tool allows you to see three key differences between how your Frenchie perceives the world visually and how your own eyes report what you are seeing back to you.

From everything you’ve read thus far, you now know that your French Bulldog can’t see the red and green color spectrum.

So all those red and green toys and treats you’ve gotten for your precious pup? Those colors are for your benefit, not for your dog’s.

But your Frenchie sees well in the yellow and blue color spectrum.

In fact, red, green, and yellow all basically look yellow. Your dog sees blue and purple as one color. And brighter neon colors like cyan and magenta look mostly greyed-out.

Because canines (whether wolves or dogs) have evolved to rely more on their vision at night than during the daylight hours, their eyes don’t distinguish brightness as well as your own eyes do.

The difference mostly lies in the grey spectrum. Your own eyes will see finer distinctions between light and dark grey than what your French Bulldog’s eyes will see.

Visual acuity, or acuity perception, is basically how sharp, clear, or in-focus an image appears. Not surprisingly, your own vision far outpaces your French Bulldog’s vision in this particular area.

By heading over to Dog Vision, you can upload any image and see how it appears as if you were looking through your French Bulldog’s eyes.

French Bulldogs, with their short brachycephalic muzzles and flat faces, can sometimes have eyesight issues that other dog breeds do not experience.

As Vet4Bulldog veterinary clinic explains, French Bulldogs are prone to a number of vision issues that may relate back to their facial anatomy.

Cherry eye, entropion, corneal ulcers, dry eye, ectopic cilia, and distichiasis all relate in some part to an abnormal eyelash or eyelid growth, malformation of tear ducts and glands linked to the third eyelid, or nictitating membrane.

Dogs use their noses and ears to “see”

Sometimes, untreated eye issues like the ones you just learned about can cause permanent visual impairment or even blindness for French Bulldogs. But this is not the disaster it may at first sound like, at least for your Frenchie.

The reason for this is because dogs “see” with their noses and ears as well as with their eyes.

PetsDoc explains that while the ideal vision for people is usually thought of like 20/20, for the average canine ideal vision is more like 20/75.

The best way to understand this is to imagine an object that is 75 feet away from you and your dog. You will be able to see it. But your dog won’t be able to see it unless it comes so close it is only 20 feet away.

However, your dog will be able to hear it coming and smell it coming far sooner than you will! This is why vision loss isn’t always as noticeable in dogs as it tends to be in people.

In fact, sometimes vision-impaired or non-sighted French Bulldogs learn to navigate a familiar environment so well by hearing and scent that visitors don’t even realize the dog is blind.

This is one of the many things that is so fascinating about dogs. Your French Bulldog’s senses all work together in a way that yours probably have not ever been forced to do.

Vision problems may relate to your Frenchie’s nose

More commonly, as Northwest Animal Eye Specialists points out, it is depth perception that is the real culprit.

Problems with canine depth perception typically relate to the shape of the dog’s nose and how it may interfere with accurate visual-spatial perception.

It is really neat that there are so many tools and research papers available today to help you learn more about how your dog sees and experiences the world.

This can help you feel closer to your dog and also provide enrichment your Frenchie will really enjoy.